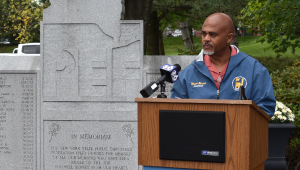 PEF marked the 20th anniversary of the terrorist attacks of September 11, 2001, with a remembrance at the memorial inscribed with the names of those who died that day or in the ensuing years from sicknesses related to the falling towers.

President Wayne Spence recalled the day everything changed for thousands of Americans.

“As a parole officer, we are called to run to danger and I know a lot of first responders passed away during 9/11,” Spence said. “Thirty-four PEF members, state workers, went to work 20 years ago and didn’t come home.”

In the days, weeks and months that followed, the country united and there was a never-before-seen sense of national community.

“In the aftermath there was a comradery in the United States,” Spence said. “It wasn’t for a day or for a week; it went on for months, almost a year. I remember seeing people driving around with stickers of flags on the back of their cars.”

PEF mobilized to provide aid to the families of its fallen members.

“There were a lot of survivors of PEF members who did not know where to turn,” Spence said. “Roger Benson, who was president at the time, marshalled the resources of PEF. He used the unionized work force, the USW staff, not AFT or SEIU, to get resources and information to those families who didn’t know where to go.”

Most of the members who died on 9/11 worked for the Tax and Finance Department and PEF Secretary-Treasurer Joe Donahue recalled that September day as a day “when all our lives changed to some degree.”

A member of his Division lost her life in the attacks.

“We must never forget the 2,977 innocent people who died that day,” he said. “The human cost and the pain that was caused by that tragic day will never be fully understood and that is why we must never forget what happened 20 years ago.”

Spence and Donahue read off the names of the PEF members who died and then observed a moment of silence.

You can view the ceremony on PEF’s Facebook page.