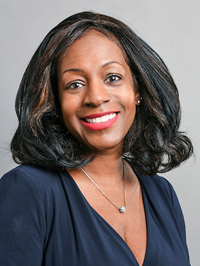 Muriel Hardy-Lee was just elected in June to a first term as a PEF trustee.  It’s a watchdog role she shares with two other trustees, Chris Buman and Bruce Giddings.

A social work assistant 3 at the New York State Office for People with Developmental Disabilities (OPWDD), Hardy-Lee entered state service in 1988 at Bronx Psychiatric Center, and transferred in 1990 to Bronx Developmental Center.  She has a master’s degree in disability studies (MDS).

As a PEF trustee, Hardy-Lee said she wants to expand her advocacy for members’ rights to fair, equitable treatment under the PEF Constitution, and ensure fiduciary oversight by reviewing fiscal records in collaboration with the PEF secretary-treasurer, her fellow trustees, PEF divisions, and the union’s accountants and auditors.

“I love fighting and advocating for members,” she said.

A PEF activist and strong advocate for more than 10 years, Hardy-Lee has held many elected and appointed leadership positions including: Division 407 council leader at the Metro NY Developmental Disabilities Services Office, co-chair of the local labor-management committee; a member of the OPWDD L-M Committee; a member of the local health and safety/workplace violence committees, and the PEF Women’s Committee.

Hardy-Lee said she takes pride in leading Division 407 because, “We are really strong and we are really united.”

Her drive to reach out and help other people overcome disabling conditions surfaced in childhood.

“I’ve been reading to the blind since I was 7 years old,” she said.

That impulse has led her to her work at OPWDD and also to take an active role in her community, serving in the Parent Teachers Associations at Yonkers Montessori Elementary, Middle, and High Schools.