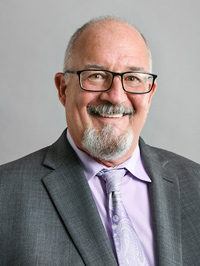 September 10, 2021 — Saving money and cutting costs, compliance with laws and regulations, and accountability – those are fundamental responsibilities for being a good secretary-treasurer says Joe Donahue, who now holds that very important PEF post for the first time.

Donahue is a senior administrative analyst at the NYS Department of Taxation and Finance, where he has worked for more than 20 years.  He holds an A.S. degree in accounting from Hudson Valley Community College.

Prior to his election as PEF secretary-treasurer in 2021, Donahue has been a member of the PEF Budget Advisory and Financial Compliance Committee, he chaired the PEF Divisions Committee, and was a trustee of the PEF Membership Benefits Plan.

Donahue also has been council leader of PEF Division 190 for 11 years and a division steward for 18 years.  He represented the division members on the PEF Executive Board for 12 years. He was also the PEF labor-management co-chair at the Department of Taxation and Finance, and has been a delegate to PEF conventions for many years.

In addition to keeping a sharp eye on PEF finances, Donahue wants to continue his lifelong commitment to protecting members’ rights in the face of an anti-labor environment, building the union’s membership and actively communicating and advocating the rights and privileges of union membership to all PEF members.

Donahue’s dad was was a union member and his mother, a nurse, was not, which gave him an early vantage point to appreciate how much of a difference union representation can make in your life and that of your family.  He also worked some non-union jobs before joining state service.

“I learned that unions improve the lives of people,” Donahue said, “and if you see things are wrong, they give you a way to try to make it right.”