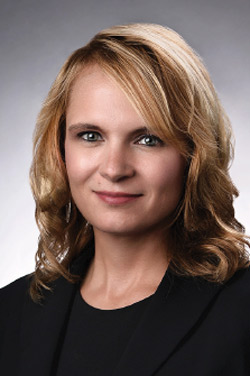 Renee Delgado first started with the Public Employees Federation in March 2008.  In June 2019, Renee was appointed General Counsel, where she supervises and administers all operations of the Legal Department, provides legal advice to union officers and staff, and litigates in state and federal courts and before administrative agencies.

In addition to her time at PEF, Renee has worked as a Special Assistant in the Counsel’s Office at the New York State Department of Labor. She has also been Assistant Counsel at the SUNY Colleges of Nanoscale Science and Engineering, in between serving as an Assistant District Attorney in Queens County and Albany County, respectively.

Renee was admitted to the New York State Bar in 2007.  She holds a Juris Doctorate from the CUNY School of Law at Queens College, a Master’s Degree in Criminal Justice from John Jay College in Manhattan, and a Bachelor’s Degree from SUNY Albany.

A native of Troy, New York, Renee now lives with her husband and their three sons in Albany County.